I started writing Beltsville Shell on the night of November 30, 2000, upon hearing of the death of my childhood friend, Mike Tanguay. With an abundance of encouragement from so many people, I finished the book on September 29, 2003. It was three years of a lot of research, reconnecting with long-lost friends, and a serious amount of just plain work.


All along the way I was driven by the joy of telling the stories and their impact on the characters in the book. That would have been enough to make the effort satisfactory as a life event.


What I couldn't appreciate then, but savor now, is the new friendships that have been forged for me and my buddies by the book. I've decided that I need to add some of their stories to the book stories, and the easiest way to do that is through this blog.


From time to time an email message shows up in my InBox that surprises me. One such message came in October 2014. The writer was someone that I didn't know --  Dave Bratton from the old neighborhood.  Dave's message was at first interesting, but later riveting.


He described how he struck up a conversation with a guy named Joe at Quality Auto Parts (it's in the book) who asked Dave if he was aware of Beltsville Shell? Dave wasn't, but was happy to borrow the book for a read. Even though Dave is younger than most of the characters in the book (by about 7 years), he soon discovered that he knew many of the names, places, and events described. He even discovered that he was friends with the author's younger brother, Pat Thomas. Dave liked the book so much that he wrote to me to ask if he could buy an autographed copy. That part of the message was similar to notes I have received over the past 17 years from many people who have enjoyed the book. It was the remainder of his message that was riveting.


Some truthful sadness is described in Beltsville Shell, but the most tragic story of all is about the passing of John (Peewee) Thompson, who was killed in his 1958 Corvette in an accident less than a mile from the Shell station. None of the Beltsville Shell regulars witnessed the event, making it all the more difficult for us to accept Peewee's passing.

Dave's note to me described that day and event in great detail as he was there at the scene of the tragedy.


"I have never known any of your old crowd so I have never met anyone that knew Peewee well. In high school I was on work study by working at Interstate Shell located at Fox Street & Rt.1 by the VW dealer. I was working the day of Peewee's accident.  I was maybe the first on the scene.  As I ran up I realized this was my first real accident scene, so when I read that part of the book I was a bit emotional and felt a connection to you and your friends. I had told the story before but never to someone close to Peewee at the time. Here is what I remember...

I just heard his car and maybe saw a flash of blue ... I knew his car (from Beltsville) and he was really moving. I always assumed he went airborne on that hill at the south side of the station and came down partially in the north bound lane at least 1/3rd of the car in that lane.  The thing that I have never forgotten was his rear wheel, tire & axle wedged under the front of the pickup,axle sticking out into his lane.

I know I walked around the scene but I can't remember anything about him or the car but I am not sure if I was too scared to look or my mind won't let me remember what I saw.  I also remember all the blue fiberglass in the road that day. . . ."


As you can imagine, it took me a while to recover from Dave's note and to write back to him.  But I finally did, and we have become friends.  Dave is now an honorary member of the JTRAMFGS Club and he regularly attends our reunions.

Dave has been a "car guy" from his teen years enjoying the slot car craze and riding to the Mighty Mo in Queenstown with older friends who drove.  Dave helped an older friend build a 1957 Chevy station wagon with a 327 and 4-speed.  The Movie "Easy Rider" inspired Dave to build and ride custom motorcycles.  With his Dad's help he customized his first car -- a Mercury Comet station wagon with flared wheel wells, mags, pin striping, and curtains(!).  He then graduated to a 1965 Mustang, then a 1968 Dodge Coronet, and, like so many of our contemporaries, to vans around 1972.

Dave's favorite car?  He likes to have a car that is just a bit different from the run of the mill hot rods.  He has TWO 1959 Chevy El Caminos!  He likes the fins and the classic styling.  His cars are so nice that he was invited to bring both of them to the 2009 Carlisle GM Nationals for the 50th Anniversary of 1959. 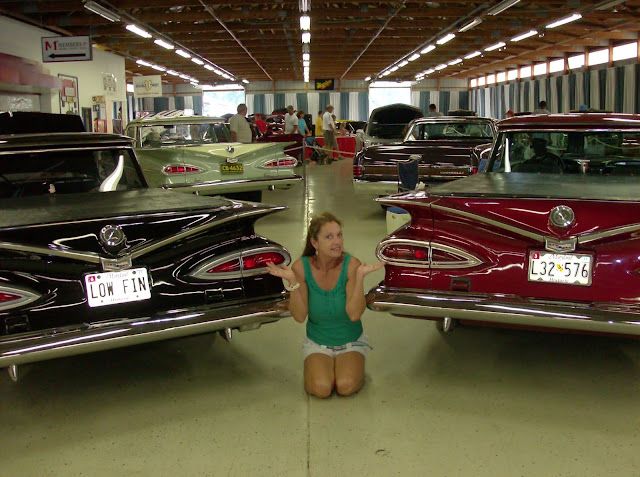 How could you choose a favorite!  The red one sports a small block Chevy with custom seats and interior. 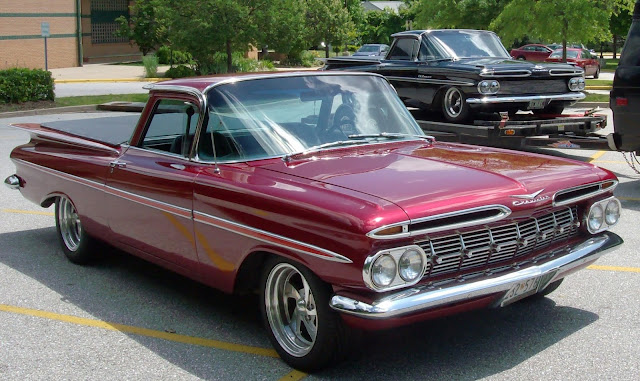 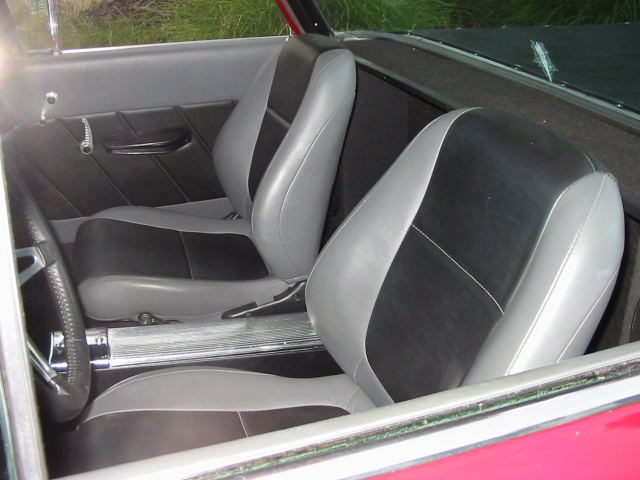 The black one is more traditional/original with a 348 with three deuces.  The interior is sporting bucket seats and a center console out of a 1963 Chevy Impala. So classic! 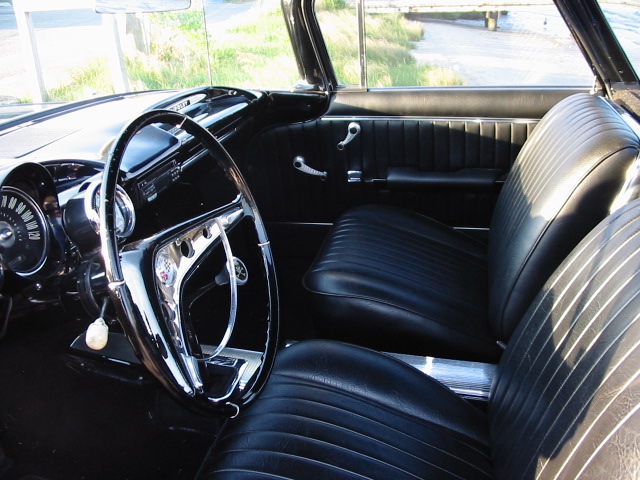 Dave's latest project is a custom 4 1/2" chop, shaved, 53 Chevy BelAir hardtop.  He calls her "Rosie" after Rosie the Riveter due to the old-school etched roses on the vent windows.  He started the car in October 2018, and recently completed it after being trapped at home with the COVID 19 mess. 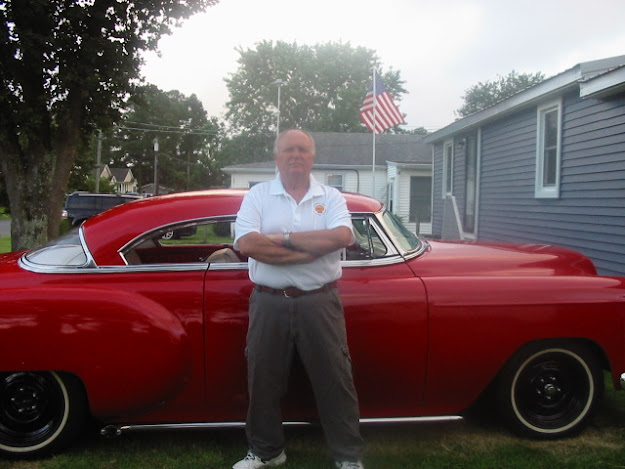 "I went completely front to back on this car since it was built 25-30 years ago. I added front disc brakes, the front end is same king pin rear steering as early Corvettes.  I did everything myself including pulling the rear out for some welding at a local shop.  I did it all in my tiny attached garage!"

I like that Dave put a Corvette grill in the 53 Chevy!! 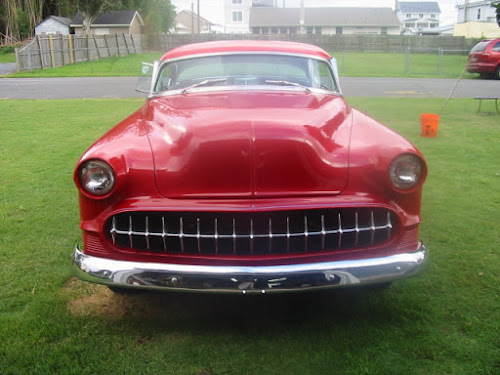 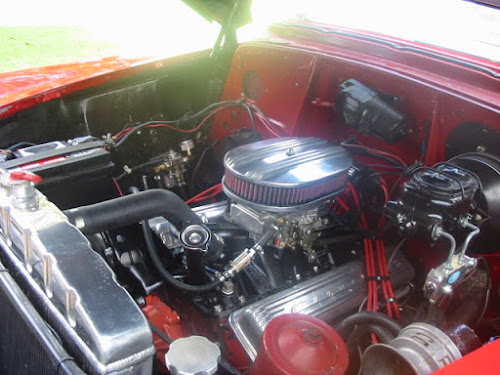 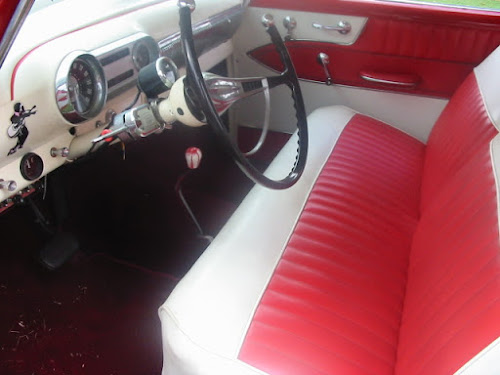 Despite our age difference, Dave fits right in with the JTRAMFGS regulars.  He knew Billy Mortfeld (who invited Dave to attend his first BSYAWYD reunion) and Carl Schinner, is getting to know Bud Duley (another restorer), and Tick Magnum. And, like everyone, Dave enjoys seeing my brother, Pat, Herman Knauer and Tom Hontz (Dave and Tom both live in Delaware) at the reunions.
Here is Dave sporting the new, official, BSYAWYD shirt! 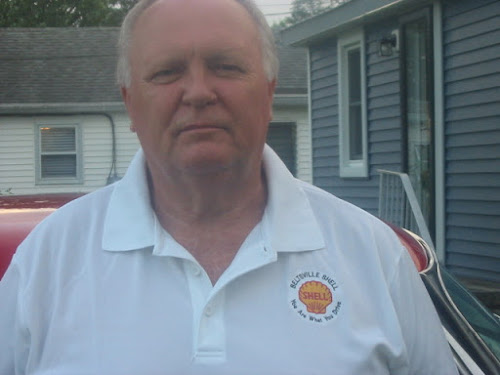 Thanks, Dave, for being part of the Beltsville Shell experience!  Maybe we can all get together again for another reunion --it's been too long!