It was on this day, November 30, twenty years ago when the spark that ignited "Beltsville Shell: You are What You Drive" was lit.

That night I sat down at my computer and wrote the remembrance to my childhood friend, Mike Tanguay.  I shared the remembrance with mutual friends.  Many of them encouraged me to write more stories and the more I wrote, the more I remembered.  And a few old friends connected me with more old friends.  And eventually the book just started writing itself.

Here is how it all started:

It was about this time last year, when I was checking addresses for the annual Christmas card mailing, that I found out that Michael Tanguay had passed away. He had endured a few tough years physically and finally died in his home in 1999. I would have given anything to have known promptly because I would have looked into the eyes of his widow and child and said the following things:

I first met “Mike” in September 1953 on the very first day of Mrs. Brock’s First Grade class at Hollywood Elementary School in College Park Maryland. Mike was the first person to talk to me as I entered the scary world of school. He said, “You are in the wrong room – Kindergarten is next door” (I’ve always been short). Once I convinced him I was in the right room, he became an instant pal, a relationship that lasted a lifetime.

Mike lived a few blocks from Hollywood Elementary in a neat older home with his Mom and Dad. Mike always called his Dad “Frenchy”. The family had a very close relationship. Mike’s Dad was very handsome, and Mike took after him. With blue-gray eyes, and light brown hair that was slightly wavy, he had the good looks all of us wanted as we became teenagers. Mike dressed well, always in fashionable clothes, but I think the only shoes he ever wore were penny loafers – he was quite the handsome dude. He loved baseball, softball, and marbles (I think he won ALL of my marbles at recess one day).

From the very beginning, Mike was a carefree soul, always appearing with a new joke or funny saying. At High Point High he was about as popular as you could be without being captain of the football team. Our friendship became closest after graduation, our bond wrapped around fast cars.

Frenchy drove a Rambler and Mike was allowed to use the family car soon after getting his driver’s license. He wasted his time trying to convince the guys that there actually WAS a Rambler Racing Team. The first car he could claim as his own was a 53 Plymouth he inherited from his Grandfather.

Mike called me one afternoon while I was working at Beltsville Shell to tell me that the brakes on the old Plymouth felt “soft” and could I help him? The suggestion I made nearly killed him. I said if he would drive the Plymouth to the Shell station, I’d do my best to try to fix it. Little did I know that a brake hose had split and he would have NO BRAKES for the 3-mile drive to the station. About 10 minutes later, as I’m pumping that expensive 24.9 cents-per-gallon gasoline into customers’ cars, I hear horns honking and tires screeching on Route 1 as everyone is swerving to miss this huge Plymouth that is ignoring the stop sign at Sunnyside Avenue and crossing four lanes of 45 MPH traffic at a brisk rate of speed. There is Mike, white-faced, swooshing past the gas pumps, then BOOM the Plymouth mounts the two-foot wall at the edge of the Shell parking lot. The happy ending is that no one was hurt and the only damage to the Plymouth was a scraped bit of bumper (those early 50’s cars were built like tanks). It cost just a few dollars for a new brake hose and a re-fill of brake fluid. We laughed about this adventure many times.

Mike’s first “real” car, and the one that got him accepted into the “Beltsville Shell JTRAMFGS” Car Club was his Pontiac GTO. 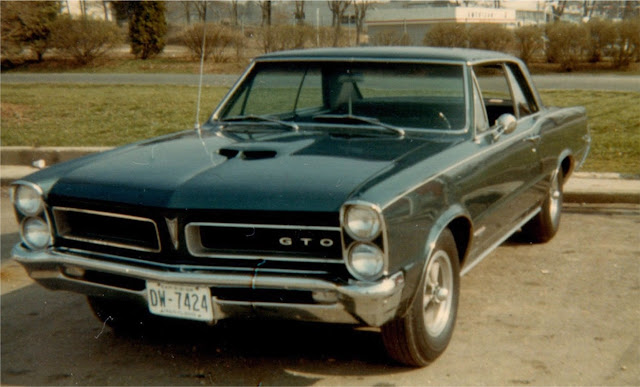 The “club” included some impressive people and cars. There were MoPars owned by Dexter Drake and Willie Anderson, the Fords of Charlie and Glenn Hopkins, Chevys like Ralph Bull’s 57 and Nacy Delauter’s beautiful gold 62 Impala, Chevelles owned by Frank Porto, Jimmy Noll and Chip Theis, and the Corvettes -- Johnny Bradley’s 427/435, Pee Wee Thompson’s 58, 59’s like mine and Jeff Hughes’, my brother Wayne’s 57, and Stingrays like Stan Moore’s and Sonny Boteler’s. But only one GTO, and none of the cars were any nicer. In a way the car reflected the owner – unique, spotless, stylish.

Together we had enough horsepower to launch a space shuttle, and individually we paid so much money in traffic fines that I’m sure we were a line item in the Prince George’s County Police Department annual budget.

Anyway, the GTO was really fine and today would be worth BIG money. Mike and Frenchy found it on a used car lot and instantly negotiated the deal. It was spotless, blue in color, had the extra-sexy chrome hood scoop, three two-barrel carbs (that went BA-WOOOOP when you floored it), 3.90 posi-traction gears, and 4-speed close-ratio Muncie Trans with the Hurst shifter. Upon acquiring the GTO, Mike’s name changed to “Tanguay” and that’s what we called him thereafter. The car was “Tanguay’s GTO”.

The members of the JTRAMFGS Car Club were known to engage in tests of acceleration on public streets. I think Tanguay enjoyed this as much as any of us. He could make that GTO burn rubber halfway down Sunnyside Avenue and could snap that Hurst shifter with the best of ‘em. As long as he owned it, I don’t think he ever put a scratch on the GTO. The same could not be said for me; Tanguay was with me the day I got a little too aggressive in the rain on Route 193 in the 59 Corvette and I scrunched the bottom of the car as I slid across a center median. Tanguay said nothing about my stupidity, and helped me get the Vette towed to the Shell Station for repairs.

Every Saturday he executed the same regimen. He would wash the GTO at home, drive it dripping wet to the Shell Station (to “blow it off”), dry and polish the paint while wearing blue jeans, the shirt of the day, and old penny loafers, fill the gas tank, check the oil, then drive home. After showering and getting his hair looking just right, he would return to the Shell station looking and smelling very nice, wearing fashionable slacks and shirt, new penny loafers, smoke a cigarette (he could imitate a movie star with his smoking gestures!), tell me a joke or funny story, then head off for his Saturday night date.

The Beltsville Shell crowd could be as brutal as their cars, but Tanguay was someone we all loved and none of us ever had any dispute with him. When the GTO drove onto the parking lot, someone would yell out “Tanguay’s here” and we all knew we would be treated to his warm humor. I was grateful that he kept me company during those years when I had to work part-time and go to Maryland full-time. You couldn’t ask for a better friend nor could you find one. Tanguay was best man at my wedding and after I moved to California in 1976 our only interaction was the annual Christmas card. Now I don’t even have that.

My life was richer having known Tanguay and a bit empty knowing he is gone. Still, every time I see a GTO, or notice a nice pair of penny loafers, a warm set of memories pushes aside whatever I was thinking about bringing a smile to my face.

I bet he was a wonderful husband and father.

at November 30, 2020
Email ThisBlogThis!Share to TwitterShare to FacebookShare to Pinterest